In part one of this series, we looked at the object database. We learned that a commit it is a type of object, as are blobs, trees and tags. A commit references a tree and a tree references other trees and blobs.

We also learned that objects are referenced by a hash, but we have not learned a lot about these hashes. Let’s find out how these hashes are determined, and why it matters.

So how is this hash determined? Git uses a technique that is called content based addressing. The contents (the thing you see when you use git cat-file -p) of the object are the only factor that determines the hash. This goes for all types of object: blobs, trees, commits, and tags.

Content based addressing helps a lot with this. Let’s see what happens when we try to add a new file to the repository we created in part one:

We can use git cat-file to take a look at the contents of the tree1:

As expected we see the newly added file is also referenced by this tree. But take a look at the first entry and compare it with the tree of the previous commit:

We can visualize this to make it more clear. In this graph, the top commit is the latest and it references its parent. Both commits have their own tree, but both trees point to exactly the same blob for the README file. Even if the second commit renamed the README file, the tree would have been different, but it would still point to the same blob. 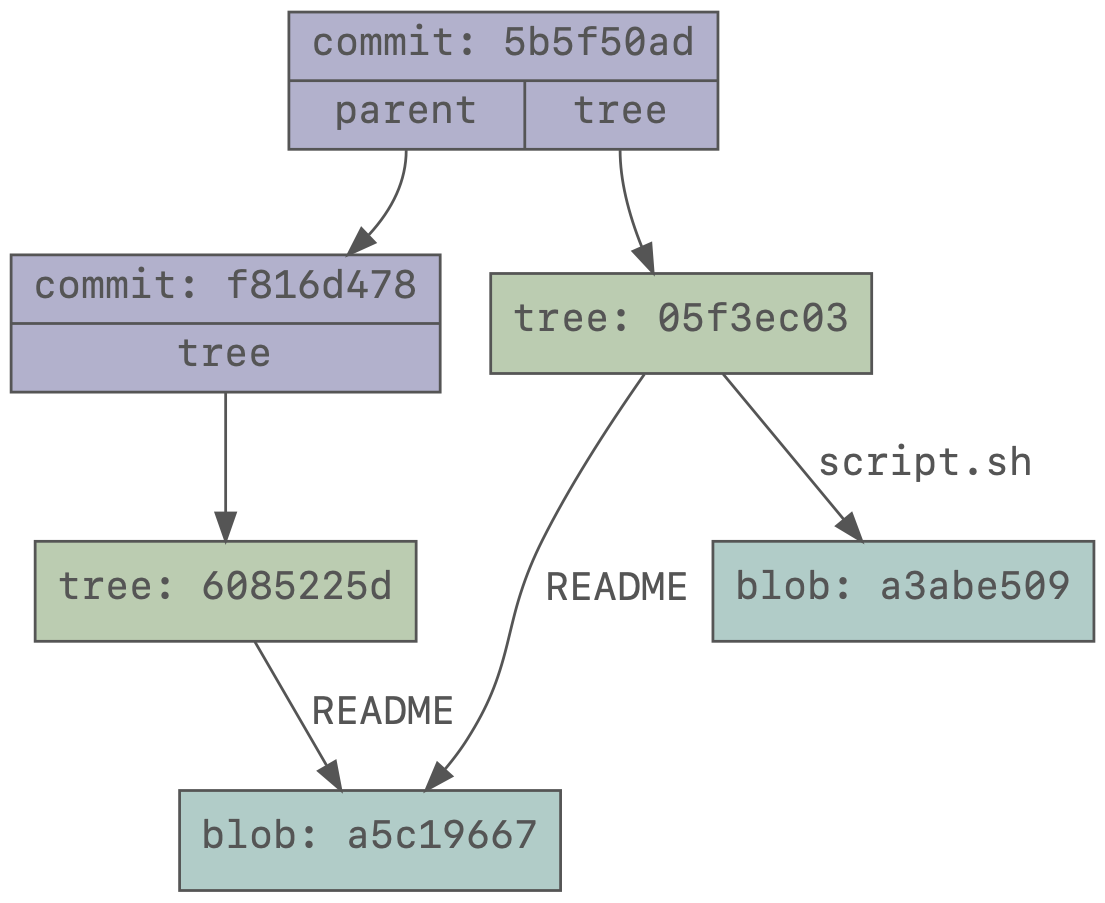 Another interesting example is what would happen if we moved the README into a docs folder instead. 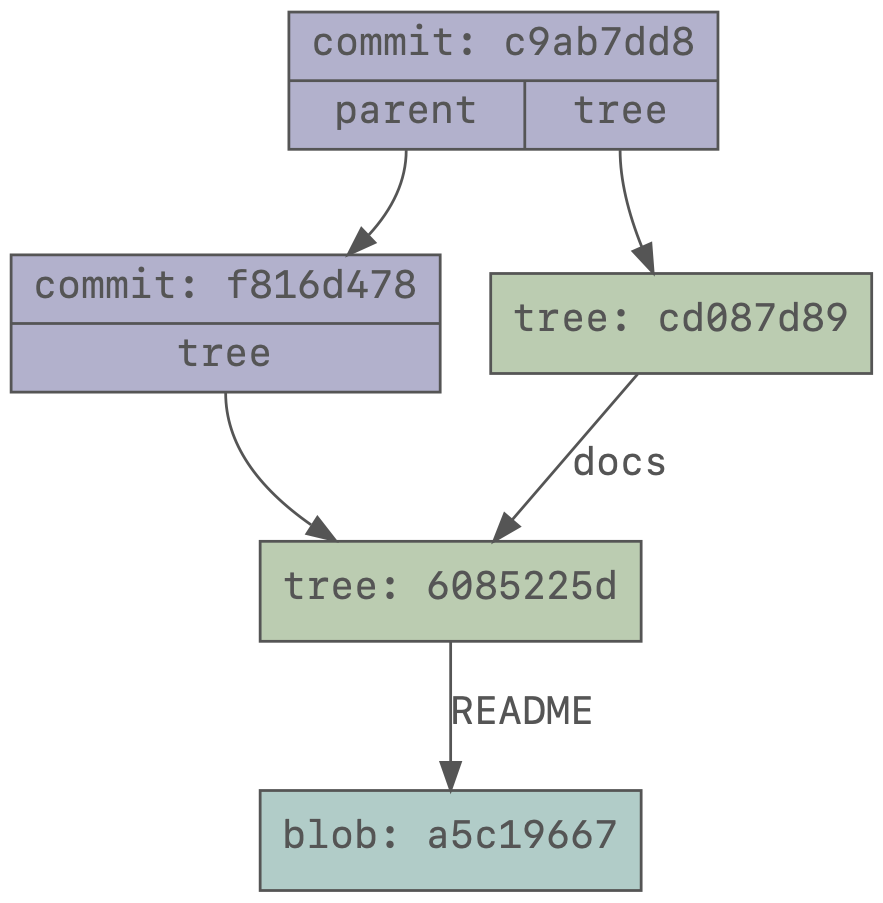 In this commit, the docs folder is exactly the same as the root folder was in the first commit. A new tree has been created for the root folder of the new commit, but the tree of the original commit has been re-used.

By using content based addressing, Git only has to store the files and trees that have changed. Those thousands of commits and thousands of snapshots take up a lot less space now. We only change a small part of the codebase in each commit.

The second advantage of content based addressing is performance when you are diffing two commits. Say we have a commit with the following tree:

The huge-directory has a lot of subfolders and lots of files. Another commit has the following tree:

If we diff those two commits, looking at every file that is stored in huge-directory would take a lot of time. Luckily, we don’t have to. If you look at the SHA’s for the huge-directory in both trees, they are the same. This must mean that they contain the same contents. Thus, the only thing we need to diff is small-file.

One concept that seems to be essential to Git is branches. Branching is very important to any version control system and you cannot do this without branches, right? Turns out, you can. Using just commits it is perfectly possible to do branching, it’s just not very convenient.

Let us take another look at our example repository. We now have two commits: the initial commit and the commit that adds script.sh. We will create two commits, but we will reset back to the second commit in between.

And we will merge two commits directly, fixing the merge conflict that we just created:

So now we have created three new commits, two simple changes and one merge commit. The merge commit also has a tree that contains the state of the repository after the merge, including the resolution of the merge conflicts.

This is what it looks like visually. The trees and blobs are no longer shown to make the graph simpler. 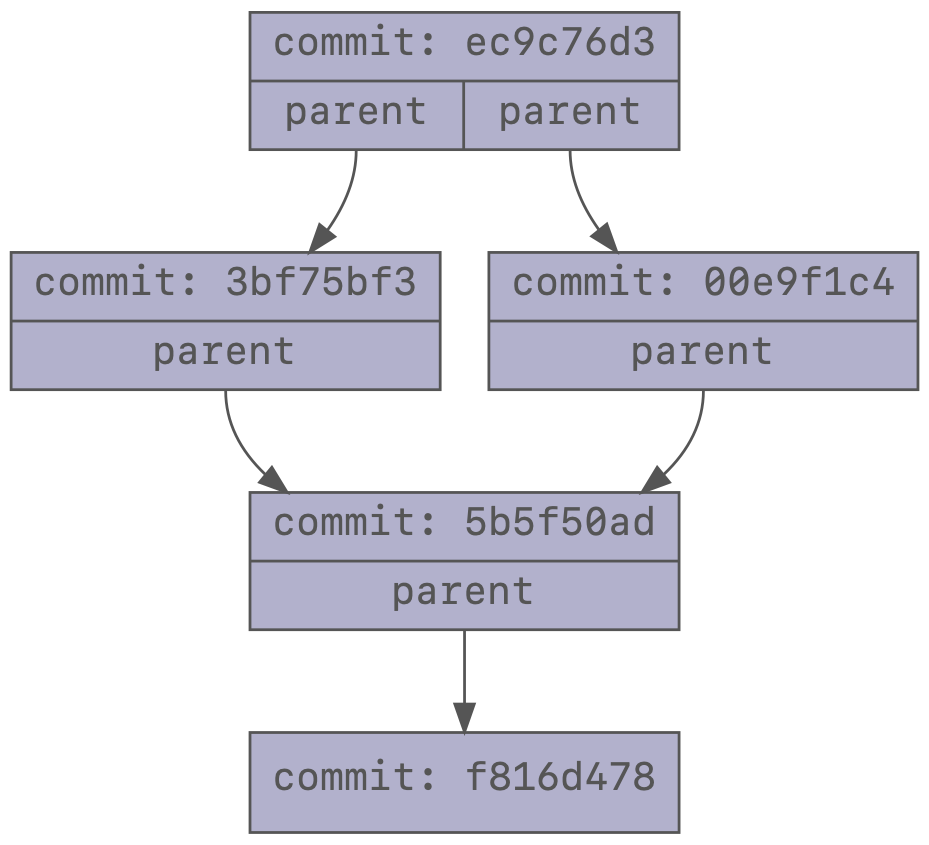 Again, the top commit is the latest. There are now two commits with 5b5f50ad as parent. This is where the branching has happened, there are now two distinct histories from this point on. The latest commit, ec9c76d3 merges these two branches, so that now the changes made in 00e9f1c4 and 3bf75bf3 are both applied.

And this is essentially what branching is. Notice how there are absolutely no branches in this picture. In fact, to get to this point, we did not create a new branch. The only branch we have is master.

What do branches and tags add?

If we can do branching without having branches, what do these branches add? So far, we have referenced every commit by its SHA. While this works, it is not very convenient even for such a small repository. Once we have hundreds or even thousands of commits, it will become impossible to keep track of all commits.

This is what we can use both branches and tags for: to have an easy reference to commits. Internally, they are nothing more than a reference to a commit. Let us take a look at what the master branch looks like. Remember that .git directory we discussed in the first part? Branches are also stored in there. We can find all branches in .git/refs/heads, so far it only contains a master file. This is what the contents of that file are:

That is the SHA of the latest commit. So every branch just references its latest commit, also known as its head. If you are currently on a branch2 and you create a new commit, the branch file in .git/refs/heads will also be updated to point to the new commit.

We will create a new branch and create a commit on that branch. This is the result of that: 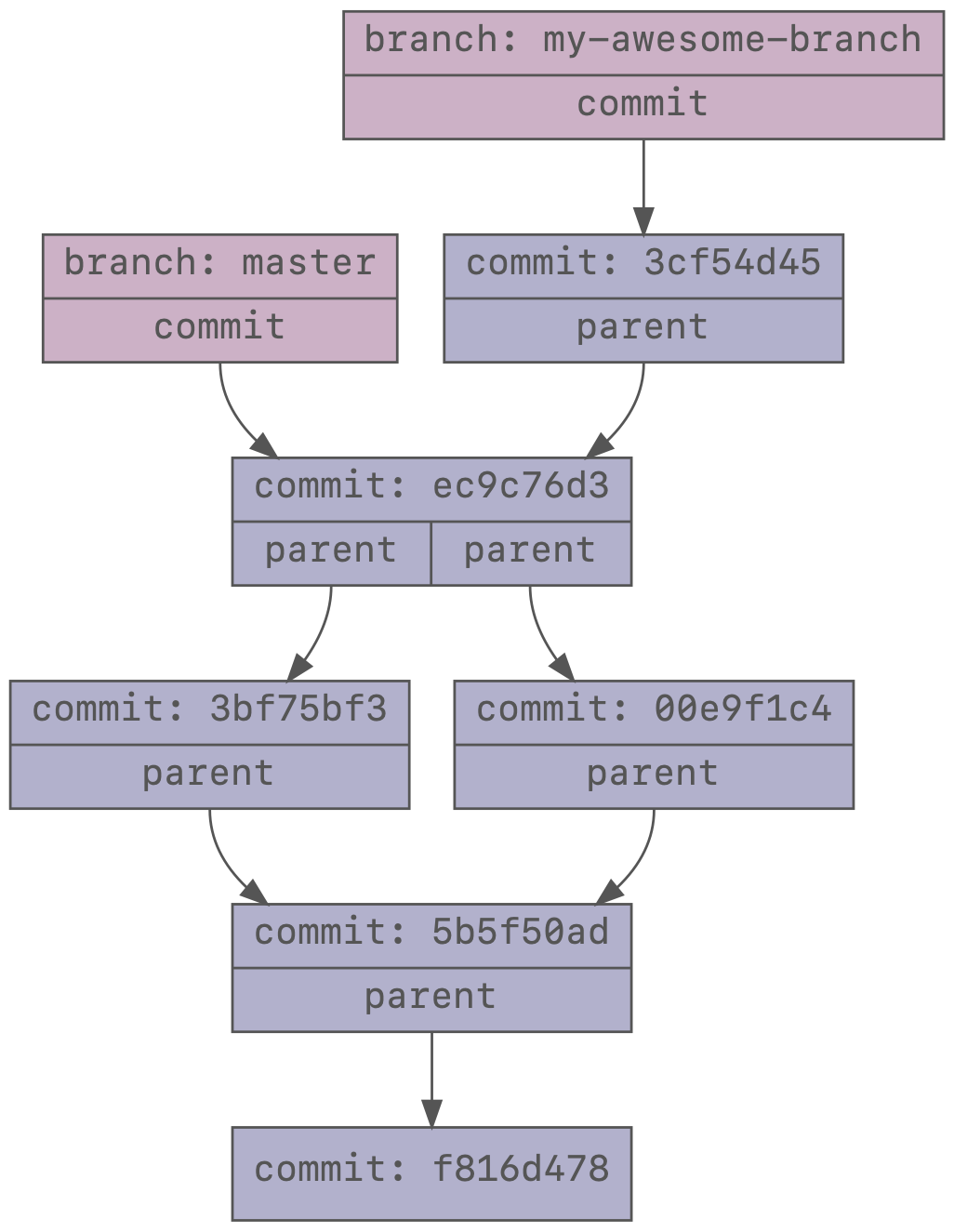 Tags are very similar to branches. The only difference is that when you check out a branch, git will remember that and move the branch along when you create new commits, while checking out a tag simply means you check out the commit that tag references. A tag will never change unless you explicitly tell Git to do so.

Lightweight tags are just a reference to a commit, exactly like a branch. They are stored in the .git/refs/tags directory, and just like branches the file name is the name of the tag and the file contains a SHA of a commit 3.

An annotated tag is an actual object that Git creates and that carries some information. For instance it has a message, tagger, and a tag date. Since these objects can not be easily found, for instance when you run git tag, a lightweight tag pointing to your annotated tag is also created.

This was how both forms of tagging look:

This is what our graph looks like when both tags are created: 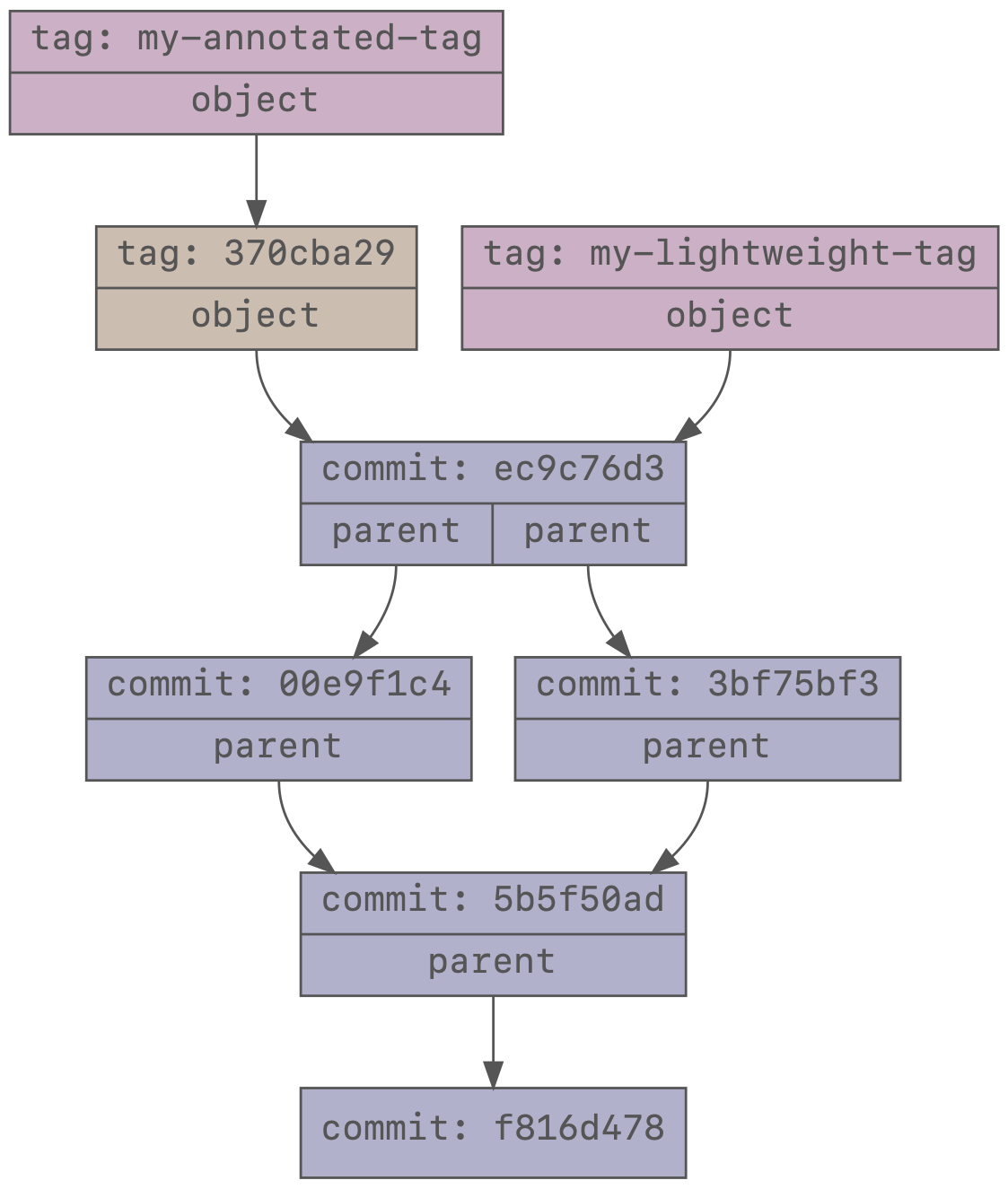 In the last part of the series, we will see some practical uses of this new knowledge.