We’ve written about building Github Pull Requests with Jenkins back in 2013. Three years later we’re still strong Jenkins users here at Kabisa, even though Jenkins changed quite a bit. Most notably Jenkins introduced the notion of Pipelines.

Jenkins Pipelines allow you to describe your entire CI/CD pipeline in code and version it together with your production code. Additionally the whole Jenkins Pipelines ecosystem allows for many powerful setups, including building jobs in Docker containers and built-in support for building Github Pull Requests.

In this post I’m going to show you how to configure Jenkins 2.0 with Pipelines to setup a complete CI/CD pipeline with builds running in Docker containers for isolation and ease of environment setup.

For the remainder of this post I’m going to assume you have:

After following this tutorial you’ll end up with the following job structure in Jenkins:

All GitHub projects will be nested under a GitHub namespace. Jenkins will build all master branches and any Pull Requests.

To get started navigate to the New Item page in Jenkins and configure as follows: 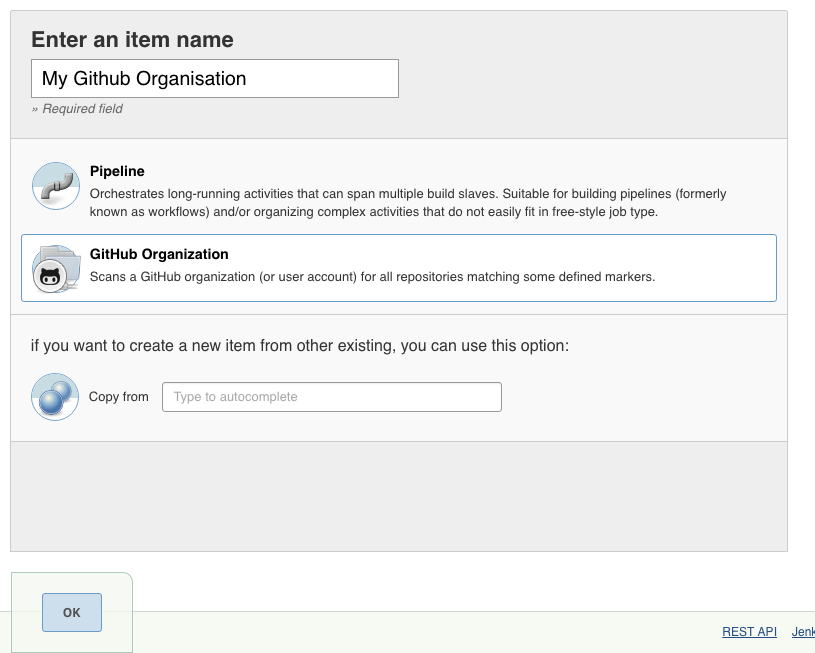 On the next screen some details about your GitHub organisation have to be configured: 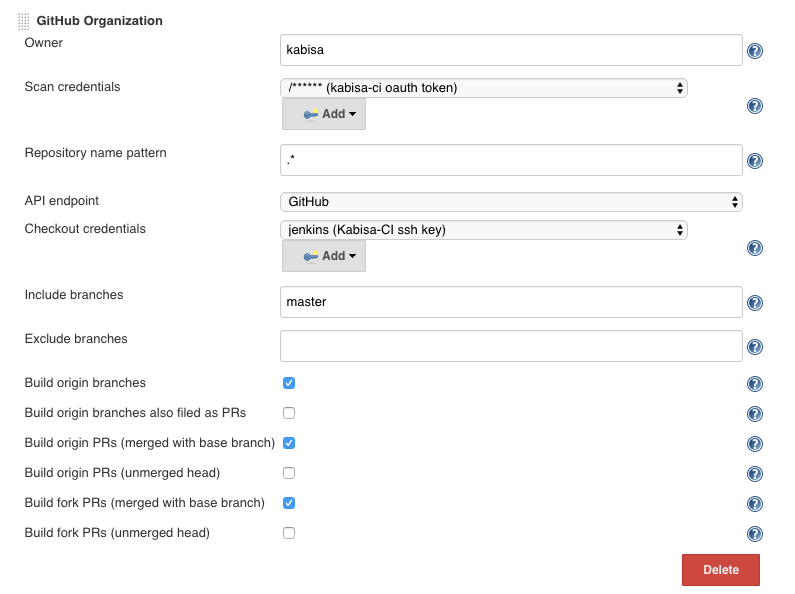 Adapt the other fields to your own taste. With the configuration shown in the screenshot Jenkins will build only the master branch of each project and all Pull Requests.

Hit the save button and Jenkins will start scanning your GitHub account for repositories supporting Pipelines. Jenkins detects this by looking for a file named Jenkinsfile in the root of a project. If this is your first interaction with Jenkins Pipelines you probably won’t have any projects that have a Jenkinsfile so read on to learn how to create one.

Jenkins is now fully setup to build any project in your GitHub organisation, provided it has a Jenkinsfile. Contrary to Jenkins 1.x no further interaction with Jenkins web UI is required to enable and configure new projects. Simply add Jenkinsfiles to your projects and Jenkins will automatically start building your project!

A Jenkinsfile tells Jenkins how to build your project. Jenkinsfiles are very powerful as you’ll have the full power of Groovy at your fingertips. I won’t go into detail about the Jenkinsfile syntax as that’s beyond the scope of this post. Here’s some documentation to get you started. Read on for a simple example.

Obviously this doesn’t do much useful, but bear with me. Put this in a file named Jenkinsfile in the root of a Github project, commit and push. With this your project can now be built by a Jenkins pipeline, however Jenkins doesn’t know about this project yet. By default Jenkins will only look for new projects once a day. To ensure the project is recognized immediately you can press the Re-scan Organization > Run Now button. Jenkins will then scan the GitHub organisation again, this time finding the Jenkinsfile we’ve just committed and setting up the project for you.

That’s it! From now on Jenkins will automatically build the master branch as commits are pushed to it, as well as build all Pull Requests each time a commit is added.

Supported repositories in your GitHub organisation are listed and Jenkins will create (temporary) jobs for branches and Pull Requests. These jobs are automatically removed when Pull Requests are closed, or branches removed.

As mentioned before Jenkins Pipelines have inbuilt support for building inside Docker containers. In an earlier post I described the virtues of running CI builds in Docker containers. With Jenkins 2.x this is much easier than before and doesn’t require any external tools (besides Docker itself obviously).

Given a Dockerfile located in the root of your project the following Jenkinsfile would use that to build your project:

This will basically run a docker build -t <job name> . and then invoke all commands contained in the inside block in the container.

If you have any issues setting this up please feel free to reply in the comments. Some things to keep in mind: